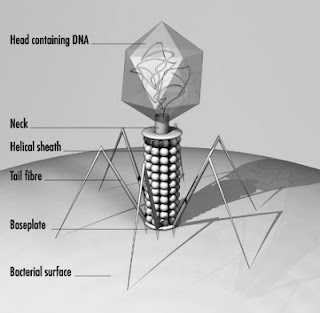 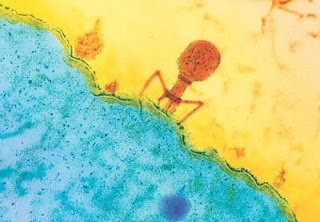 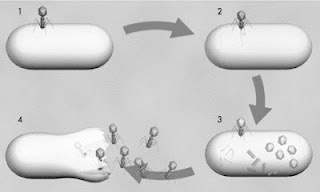 TOP:  Anatomy of a BacteriophageMIDDLE:  A Bacteriophage Attacking a BacteriumBOTTOM:  What a Phage Does to its Host
The cycle begins when the virus uses its tail fibers to attach itself to its victim. The details of what happens next vary, but the process is always the same: the phage’s genetic material, which is located in its head, enters the bacterium.
Here, we’ll use T4, a well-studied phage infecting the Escherica coli bacterium, as an example.
(1) T4 contracts its tail sheath which pushes a tube located within the tail through the membrane of the bacterial cell.
(2) The phage’s DNA is passed through the tube into the cell, where it takes control, brutally stops many of its vital functions and forces it to churn out new virus components – heads, tails, tail fibers – in production-line style.
(3). Finally, enzymes dissolve the wall of the bacterium from the inside and the newborn bacteriophages reach the exterior, ready to attack new victims.
(4)  But these viruses proceed very selectively as they do so. Most of them attack only a subgroup of a single bacterial species. Generally, they don’t touch animal or human cells, which is why they are harmless to human beings.
Read more …
[ X - images and basic text]
Posted by alisha marie [smiles] at 12:27 PM