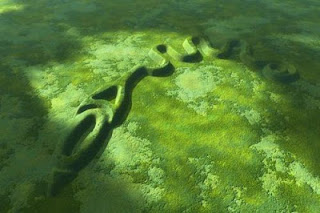 The figure of a giant snake, apparently uncoiling itself, was excavated in the late 19th century. The massive serpent is nearly a quarter-mile long. Recent carbon-dating research suggests the Fort Ancient culture built the monument roughly 900 years ago.

The serpent’s body is made of raised berms of grassy earth that weave across a plateau. On the summer solstice, the setting sun aligns with the snake’s head.
The earthwork is now surrounded by a park that offers beautiful hikes through leafy forests, beside creeks and along rocky cliffs.
Posted by alisha marie [smiles] at 9:20 PM