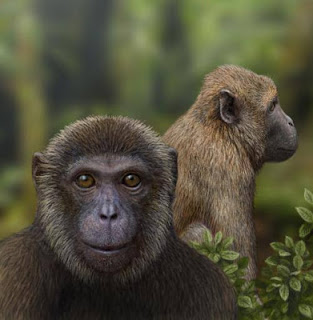 Two fossil discoveries from the East African Rift reveal new information about the evolution of primates, according to a study published online in Nature this week led by Ohio University scientists.
The team’s findings document the oldest fossils of two major groups of primates: the group that today includes apes and humans (hominoids), and the group that includes Old World monkeys such as baboons and macaques (cercopithecoids).
Geological analyses of the study site indicate that the finds are 25 million years old, significantly older than fossils previously documented for either of the two groups. Both primates are new to science, and were collected from a single fossil site in the Rukwa Rift Basin of Tanzania.
Rukwapithecus fleaglei is an early hominoid represented by a mandible preserving several teeth. Nsungwepithecus gunnelli is an early cercopithecoid represented by a tooth and jaw fragment..
(read more: PhysOrg)                    (illustration by Mauricio Anton)
Posted by alisha marie [smiles] at 9:53 PM