Last week, the Senate Environment and Public Works Committee was scheduled to vote on the nomination of Gina McCarthy, a bipartisan choice to be the next
Environmental Protection Agency administrator.
None of the eight Republican members of the committee showed up,


boycotting the vote, and effectively blocking it altogether.
Here's a detail that's getting left out of the news reports:
Seven of those Republicans don't actually believe in the science behind climate change
-- and they refuse the notion that we have a responsibility to act on it. 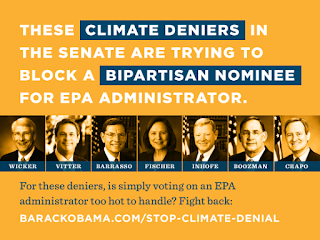 In 2009, the Senate easily confirmed McCarthy to head the EPA's Clean Air Division. Before that, she worked as the environmental enforcer for Mitt Romney in Massachusetts.