curiosity and shaler on mars

The vehicle is currently sitting in a small depression on the floor of Gale Crater known as Yellowknife Bay. Just before conjunction, it drilled into a mudstone in a rock unit referred to as Sheepbed and found further compelling evidence for a watery past in Gale - sediments that possibly once formed a lakebed. Curiosity is due to turn its drill again in this mudstone for further analysis before climbing out of Yellowknife Bay and heading for the crater's big central mountain, Aeolis Mons (Mount Sharp). But almost as soon as it starts that journey, the robot is going to stop at some of the most spectacular rocks seen so far on the mission.
Scientists have mentioned the so-called Shaler outcrop but haven't yet spoken about it in great detail. Shaler is a classic example of cross-stratification - a structure produced from thin, inclined layers of sediment. You'll have seen examples in a river or on a beach. The turbulent flow of water creates undulations in the bed sediments - a series of ripples or dunes that slowly migrate in the direction of the water current. As they cascade downwards, they form discrete layers that can be preserved over geological time as laminations in the rock. The sediment grains bouncing along the bed get pushed up the rearward-facing slope (stoss) and then avalanche down the other side (lee). 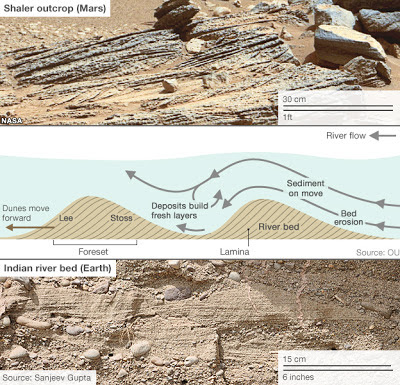 If you look at the pictures of Shaler taken by Curiosity, you can see how subsequent erosion has taken its toll on this preserved bedform. Layers just a few millimetres thick are now falling out. Thin plates of rock are strewn over the ground.
For anyone about to begin their study of geology, cross-stratification, or cross-bedding, will be one of the first topics to be covered in "sedimentary processes", and Shaler is a beautiful example.
"It's textbook; you could use the Shaler pictures of cross-bedding in an intro-textbook," Prof John Grotzinger, the project scientist on the Curiosity mission, told me.
"For a while Shaler really was a contender to drill. We were discussing it as a team and then we drove down into Sheepbed and thought 'wow, well let's put Shaler off to the side'."
But scientists will now get a chance to study Shaler in more detail in the coming weeks, using the rover's cameras and survey instruments.
They're keen to establish for sure how those thin layers were built.
At first glance, it might seem obvious that it was through the action of flowing water (fluvial), but the Curiosity team needs to rule out the possibility that these rocks were deposited by the wind (aeolian) or by some kind of surge, such as the fast-moving clouds of gas and rock that will often plummet down the sides of particular types of volcano (a pyroclastic surge).
"Aeolian. That's the one you always have to falsify on Mars because it's a windy planet," says Prof Grotzinger.
This can be done by looking at the size of the rock grains in the layers; and from the pictures taken of Shaler on the way into Yellowknife Bay, it seems the particles are simply too big to have been carried in the wind. Further imagery will confirm that.
There are ways to discount the base surge idea, also, explains Dr Lauren Edgar from Arizona State University.
"If you're migrating faster than you're accumulating, you just preserve the lee side because you're eroding on that stoss side. However, in a pyroclastic surge environment, you often have high rates of accumulation relative to migration, so as the bedform is migrating it is also rapidly accumulating more sediment. This means you tend to get the full stoss-side and lee-side preserved," she told BBC News.
Another check is to look for a diversity of flow directions. A surge deposition will tend to move radially away from a point source. Cross-stratification from water currents, on the other hand, will likely show movement in assorted directions.
To be honest, it's hard to think where a surge might have come from in Gale. There are no volcanoes around.
But Curiosity should nail all this with its return visit to Shaler.
Here's the really clever thing, though, I think. Cross-stratification is one of those rock structures that is so well understood, you can use it to pull out some amazing information about the past environment in which it occurred.
I've mentioned the direction of flow, but you can also determine the depth of the water and the speed of the water - not precisely, but to a good approximation.
Ponder that for a moment. That's information about an environment that existed on another planet millions of kilometres away.
"The other really nice thing," says Prof Sanjeev Gupta, a Curiosity science team-member from Imperial College London, "is that what you're recording at Shaler is perhaps just a few minutes to hours of migration in those dunes, and then that activity has been preserved for billions of years. That's stunning."
Edgar, Grotzinger and Gupta presented their latest thinking about Shaler on a poster at the recent European Geosciences UnionGeneral Assembly. Two of their colleagues on the work have some particularly nice web resources related to cross-stratification.
Prof Dawn Sumner from the University of California at Davis describes how the layers are built in a YouTube video. Dr Dave Rubin, at the US Geological Survey, has a collection of animations to show the different forms. And click here to see a tank experiment. Watch the ripples migrate into view from the left.
Finally, listen out for Sanjeev Gupta on the BBC's The Life Scientific next week. He'll be talking about Mars with Jim Al-Khalili. 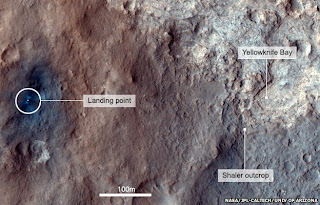