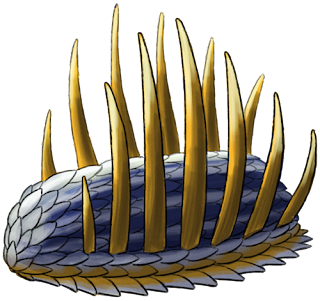 Wiwaxia was one of the bizarre animals found in the 505-million-year-old Burgess Shale Formation of British Columbia, Canada.
Squashed flat in the rocks, these 5cm (2”) spiny creatures were difficult to analyze and reconstruct, and what exactly they were is still being debated. For many years they were tentatively considered to be distant relatives of polychaete or annelid worms, but more recent studies and better microscopic imaging techniques have found a primitive radula-like structure in their mouths — suggesting that they might actually be closer related to molluscs.
The armour coat of scale-like sclerites and the long asymmetrical rows of spines were probably a defense against predators. I’ve given it a splash of some sea-slug warning colors here just for fun.
Posted by alisha marie [smiles] at 10:00 AM