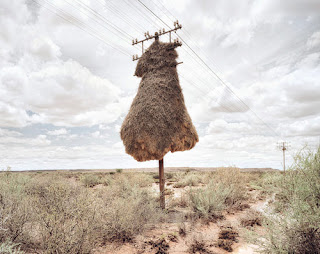 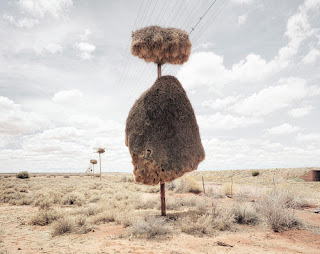 Massive Bird Nests Built on Telephone Poles in Southern Africa are Home to Multiple Species of Birds
by Christopher @ Colossal
No these aren’t haystacks stuck in a phone pole. Visit the Kalahari Desert in the south of Africa and you’re bound to run into a peculiar animal called the Sociable Weaver Bird. The birds are called “social” not just because they live in organized colonies, but because they build massive homes out of sticks, grass and cotton that are home to several other kinds birds. That’s right, the nests are so large that birds of other species are welcome to setup shop, not the least of which is the South African pygmy falcon which lives exclusively inside the social weaver’s nests that often accomodate over 100 birds at at time. Via the San Diego Zoo:

The sociable weaver’s nest sees plenty of guests—a regular Kalahari Desert inn! The South African pygmy falcon Polihierax semitorquatus relies completely on the sociable weavers’ nest for its own home, often nesting side by side with the sociable weavers. The pied barbet, familiar chat, red-headed finch, ashy tit, and rosy-faced lovebird often find comfort in the cozy nesting chambers, too. Vultures, owls, and eagles will roost on the nests’ broad roof. Why are weavers willing to share the huge nest they worked so hard to make? More residents mean more eyes keeping a watch for danger. And the weavers often learn from the other birds where new sources of food can be found.

Photographer Dillon Marsh has a lovely series of weaver bird nest photographs titled Assimilation that are well worth a look.