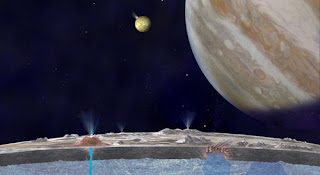 A Window Into the Sub Ice Ocean of Jupiter’s Moon, Europa
If you could lick the surface of Jupiter’s icy moon Europa, you would actually be sampling a bit of the ocean beneath. A new paper by Mike Brown, an astronomer at the California Institute of Technology in Pasadena, Calif., and Kevin Hand from NASA’s Jet Propulsion Laboratory, also in Pasadena, details the strongest evidence yet that salty water from the vast liquid ocean beneath Europa’s frozen exterior actually makes its way to the surface.

The finding, based on some of the best data of its kind since NASA’s Galileo mission (1989 to 2003) to study Jupiter and its moons, suggests there is a chemical exchange between the ocean and surface, making the ocean a richer chemical environment. The work is described in a paper that has been accepted for publication in the Astronomical Journal.

The exchange between the ocean and the surface, Brown said, “means that energy might be going into the ocean, which is important in terms of the possibilities for life there. It also means that if you’d like to know what’s in the ocean, you can just go to the surface and scrape some off.” …
(read more: Jet Propulsion Lab.)         (image: NASA/JPL-CalTech)
Posted by alisha marie [smiles] at 11:11 PM