CleanTechnica has an exclusive on a new solar technology that claims to be able to produce power with a levelized cost of energy (LCOE) of8¢/kWh. That is mind-boggling, “two-thirds the price of retail electricity and over 3 times cheaper than current solar technology.” If the claim proves to be true (and a lot can happen between prototype and mass manufacturing), it could revolutionize the solar industry.


The company is called V3Solar (formerly Solarphasec) and its product, the Spin Cell, ingeniously solves two big problems facing solar PV.
First, most solar panels are flat, which means they miss most of the sunlight most of the time. They only briefly face direct sunlight, unless expensive tracking systems are added. The Spin Cell is a cone.

The conical shape catches the sun over the course of its entire arc through the sky, along every axis. It’s built-in tracking.
The second problem: Solar panels produce much more energy if sunlight is concentrated by a lens before it hits the solar cell; however, concentrating the light also creates immense amounts of heat, which means that concentrating solar panels (CPV) require expensive, specialized, heat-resistant solar cell materials.
The Spin Cell concentrates sunlight on plain old (cheap) silicon PV, but keeps it cool by spinningit.
It’s just so damn clever.
Here’s a video that explains:
The company’s technology claims have been confirmed by a technical review commissioned from independent consultant Bill Rever. As to the 8¢/kWh cost claim, the company told CleanTechnica, “We think we can go below that, but we want to stay conservative.” Hitting it, or close to it, could shake up the energy world. Here’s a chart comparing LCOE for various power sources: 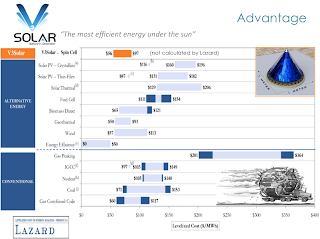 That is a whole new ballgame right there.
The company’s aim is to capture 3 percent of the energy market. For context, CleanTechnica notes that “all solar power installed in the U.S. to date currently accounts for about 0.5-1% of the energy market.” More than tripling the size of the U.S. solar market is … well, not short on ambition.
Most impressively, to me, the company tells CleanTechnica that it already has over 4 GW of requests for orders. There is 7 GW of installed solar in the U.S., total.
There’s lots, lots more on the technology over on CleanTechnica, if you want to dig in.
To me, the most exciting implications of the technology (again, if it proves out) are for distributed energy. Spin Cells are only a meter across and quite aesthetically appealing. You could carpet a city in these. Like this: