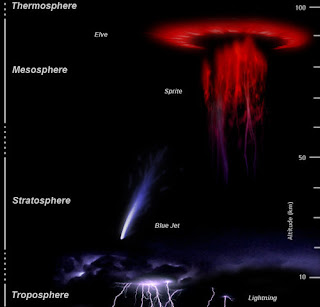 Upper-atmospheric lightning or upper-atmospheric discharge are terms sometimes used by researchers to refer to a family of short-lived electrical-breakdown phenomena that occur well above the altitudes of normal lightning and storm clouds. Upper-atmospheric lightning is believed to be electrically induced forms of optical fluorescence. The preferred usage is transient luminous event (TLE), because the various types of electrical-discharge phenomena in the upper atmosphere lack several characteristics of the more familiar tropospheric lightning.
There are several types of TLEs, the most common being sprites. Sprites are flashes of bright red light that occur above storm systems. C-sprites (short for “columniform sprites”) is the name given to vertical columns of red light. C-sprites exhibiting tendrils are sometimes called carrot sprites. Other types of TLEs include sprite halos, blue jets, gigantic jets, blue starters, and ELVES. ELVES (Emission of Light and Very Low Frequency perturbations due to Electromagnetic Pulse Sources) refers to a singular event which is commonly thought of as being plural. TLEs are secondary phenomena that occur in the upper atmosphere in association with underlying thunderstorm lightning.
TLEs generally last anywhere from less than a millisecond to more than 2 seconds. The first TLE was captured accidentally in a video recording in 1989. University of Minnesotaresearchers were waiting to record a rocket launch and pointed the camera at a distant thunderstorm. A TLE was later identified, appearing in only two frames of the film. TLEs have been captured by a variety of optical recording systems, with the total number of recent recorded events (early 2009) estimated at many tens-of-thousands. The global rate of TLE occurrence has been estimated from satellite (FORMOSAT-2) observations to be several million events per year
Posted by alisha marie [smiles] at 11:56 PM