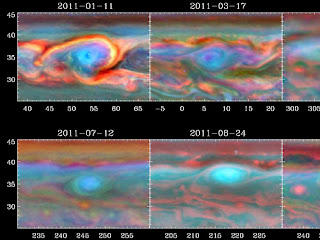 NASA’s Cassini Watches Storm Choke on Its Own Tail on Saturn
by Jia-Rui C. Cook
Call it a Saturnian version of the Ouroboros, the mythical serpent that bites its own tail. In a new paper that provides the most detail yet about the life and death of a monstrous thunder-and-lightning storm on Saturn, scientists from NASA’s Cassini mission describe how the massive storm churned around the planet until it encountered its own tail and sputtered out. It is the first time scientists have observed a storm consume itself in this way anywhere in the solar system.

“This Saturn storm behaved like a terrestrial hurricane - but with a twist unique to Saturn,” said Andrew Ingersoll, a Cassini imaging team member based at the California Institute of Technology, Pasadena, who is a co-author on the new paper in the journal Icarus. “Even the giant storms at Jupiter don’t consume themselves like this, which goes to show that nature can play many awe-inspiring variations on a theme and surprise us again and again.”

Earth’s hurricanes feed off the energy of warm water and leave a cold-water wake. This storm in Saturn’s northern hemisphere also feasted off warm “air” in the gas giant’s atmosphere. The storm, first detected on Dec. 5, 2010, and tracked by Cassini’s radio and plasma wave subsystem and imaging cameras, erupted around 33 degrees north latitude.
Shortly after the bright, turbulent head of the storm emerged and started moving west, it spawned a clockwise-spinning vortex that drifted much more slowly. Within months, the storm wrapped around the planet at that latitude, stretching about 190,000 miles (300,000 kilometers) in circumference, thundering and throwing lightning along the way…
(read more: Jet Propulsion Laboratory)