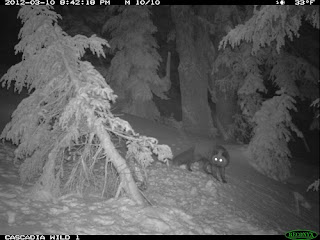 Hidden cameras have discovered three foxes in the mountains of Oregon, and researchers think they may be previously unknown populations of the Sierra Nevada red fox, a subspecies that’s one of the rarest mammals in North America. Fewer than 50 of the foxes are thought to remain in the wild in known relict populations near Sonora Pass and Lassen Peak in California.
Researchers set up motion-triggered remote cameras that took pictures of the montane, or mountain-dwelling, red foxes this winter and spring on Oregon’s Mount Hood and in Crater Lake National Park, the first time foxes have been verified in these areas in decades. Researchers presume these are Sierra Nevada red foxes, because they are the only mountain-dwelling fox native to Oregon. Researchers hope to collect hair and saliva samples to perform genetic tests to prove their hunch.
The federal government is currently considering listing the animal under the Endangered Species Act, after being petitioned by the Center for Biological Diversity, a conservation group…
(read more: Our Amazing Planet)           (photo: Cascadia Wild)
Posted by alisha marie [smiles] at 12:24 AM