Is 10 Years in Jail Enough Hard Time for Murdering a Rhino? 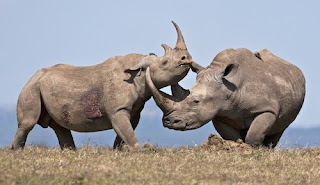 In addition to a decade in prison, South Africa adds a $110,000 fine to convicted rhino killers.

by Maria Goodavage
Yesterday, January 29, South Africa’s Department of Environmental Affairs upped the penalties for rhino poaching to something beyond a slap on the wrist. The maximum fine will increase to about $110,000, with prison time of up to ten years—double what it had been.
The ruling was an attempt to stem the horrific tide of poaching in order to get a rhino’s coveted horns. “The price of rhino horn is increasing exponentially, but the penalty is not,” Mike Knight, chairman of the Southern African Development Community Rhino Management Group, said in a Times Live article.
But even the increased penalties aren’t enough for contributing to the demise of a critically endangered species. The monetary payoff for rhino horns is exorbitant, and the new penalties would not likely dissuade would-be poachers…
(read more: TakePart.org)                 (photo: Nigel Pavitt/Getty)
Posted by alisha marie [smiles] at 12:22 AM