How the Star-Nosed Mole ‘Sees’ With Its Ultra-Sensitive Snout 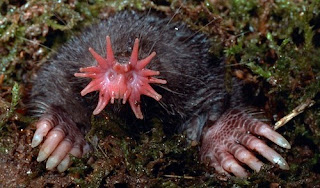 That’s an actual, earthly animal you’re looking at in the photo above—not, as you might have assumed, a creature out of Star Wars. The star-nosed mole, which resides in the bogs and wetlands of the eastern U.S. and Canada, is roughly the size of a rat when fully-grown. It’s functionally blind and eats insects, worms and small fish.

But the most noticeable aspect of the animal is its utterly strange appearance, dominated by its 22-tentacled ultra-sensitive snout, called a star (those aren’t its eyes and face at the center of the pink fleshy area, but rather its nostrils). This snout, used to hunt and grab prey, features more than 100,000 nerve endings packed into an area barely more than 1 cm in diameter, making it one of the most sensitive touch organs in the whole animal kingdom.
Continue reading at Smithsonian.com.
Posted by alisha marie [smiles] at 12:17 AM