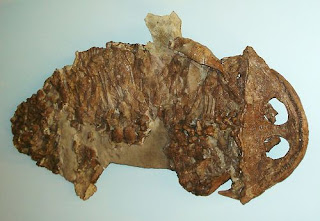 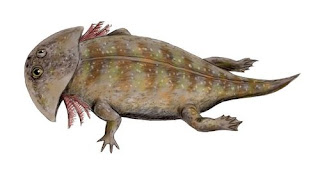 Genus Gerrothorax
(meaning wicker chest)
Gerrothorax was a genus of temnospondyl amphibians from Triassic Europe with fossils being found in Greenland and Germany. This genus is compromised of only one species G.pulcherrimus although some other species have been proposed. This animal was fairly large for an amphibian growing up to 3ft long, it also had a very flat body, presumably for helping it hide in mud, and a football shaped skull similar to the one of Diplocaulus. Fossil evidence shows that gerrothorax retained its larval gills through adulthood, similar to modern amphibians like the olm and axolotl. This animal also had a unique method of opening its mouth. rather than dropping its jaw to open its mouth it lifted its head up (like a toilet seat) to catch prey.