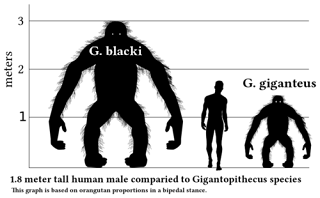 GIGANTOPITHECUS, EXTINCT ASIAN APE:
1. Did Bigfoot Really Exist? How Gigantopithecus Became Extinct
Bigfoot. Sasquatch. Yeti. The Abominable Snowman. Whatever you want to call it, such a giant, mythical ape is not real—at least, not anymore. But more than a million years ago, an ape as big as a polar bear lived in South Asia, until going extinct 300,000 years ago.
Scientists first learned of Gigantopithecus in 1935, when Ralph von Koenigswald, a German paleoanthropologist, walked into a pharmacy in Hong Kong and found an unusually large primate molar for sale.
Read more: http://blogs.smithsonianmag.com/hominids/2012/01/did-bigfoot-really-exist-how-gigantopithecus-became-extinct/#ixzz2EV4uJw4J
2. The Ape That Was:
For thousands of years, Chinese pharmacists have used fossils - which they call dragon teeth and dragon bones - as ingredients in potions intended to cure ailments ranging from backache to sexual impotence. The fossil-rich caves of southern China have been, and still are, sedulously mined by farmers, who sell these medicinal treasures to apothecaries in the cities. In just such a pharmacy, in Hong Kong in 1935, the German paleoanthropologist Ralph von Koenigswald came across a large fossil primate molar that did not belong to any known species…
read more: http://www.uiowa.edu/~bioanth/giganto.html
Posted by alisha marie [smiles] at 10:36 AM