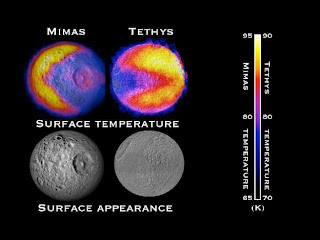 What you're seeing there is the infrared image taken of the moon Mimas in 2010 and the other is of the moon Tethys taken this year. The red and yellow areas show the warmest places on the moon.
"Finding a second Pac-Man in the Saturn system tells us that the processes creating these Pac-Men are more widespread than previously thought," said Carly Howett, the lead author of a paper explaining the findings, which was published in the journal Icarus.
As NASA writes in a press release, it's an odd shape, but scientists think they know how it came to be.
NASA reports:


"Scientists theorize that the Pac-Man thermal shape on the Saturnian moons occurs because of the way high-energy electrons bombard low latitudes on the side of the moon that faces forward as it orbits around Saturn. The bombardment turns that part of the fluffy surface into hard-packed ice. As a result, the altered surface does not heat as rapidly in the sunshine or cool down as quickly at night as the rest of the surface, similar to how a boardwalk at the beach feels cooler during the day but warmer at night than the nearby sand. Finding another Pac-Man on Tethys confirms that high-energy electrons can dramatically alter the surface of an icy moon. Also, because the altered region on Tethys, unlike on Mimas, is also bombarded by icy particles from Enceladus' plumes, it implies the surface alteration is occurring more quickly than its recoating by plume particles." npr