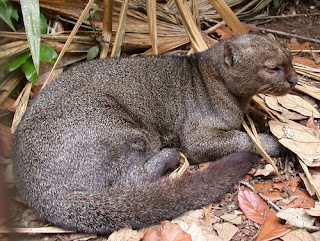 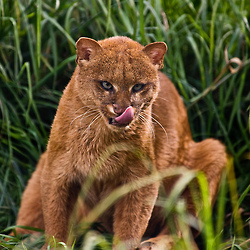 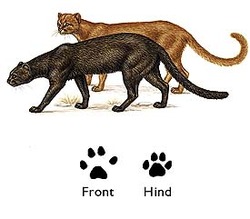 Jaguarundi (Puma yagouaroundi)
by Jessica Rick
Compared to other small neotropical felids, jaguarundis have a more elongated body, smaller, more rounded ears, and shorter limbs relative to body size. Jaguarundis are slightly larger than domesticated house cats. The head and body length may range from 505 to 770 mm. The tail is long, ranging from 330 to 600 mm. The weight ranges from 4.5 to 9.0 kg. Males are slightly larger and heavier than females of the same population. Two color morphs are present in H. yaguarondi. One is dark grayish-black, and the other is reddish in color.
Jaguarundis are known as very secretive animals. It was once believed that they were solitary except during the breeding season. Recent reports of pairs suggest that they may be more social than once thought. Pairs are often sighted in Paraguay, but individuals in Mexico are believed to be solitary. They are mostly diurnal, with their peak in activity occurring around 11 in the morning. Some activity does occur at night, and they are often reported as being nocturnal and diurnal. Jaguarundis are terrestrial but are also good climbers and swimmers…