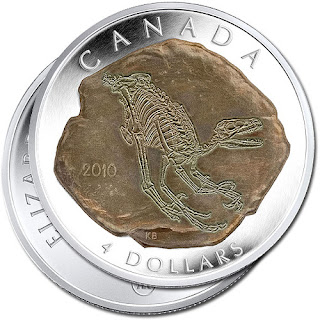 “The Royal Canadian Mint introduces the 2010 Dromaeosaurus silver proof coin, the fourth and last coin in the Dinosaurs series celebrating Western Canada’s reputation as a treasure trove of fossil specimens…
Dromaeosaurus (or “running lizard”) was one of two raptor species that lived in Albertabetween 74 and 76 million years ago when the province and neighboring Saskatchewanwere the lush subtropical shore of a great inland sea. These dinosaurs ran upright on their two hind legs. They measured about 2.5 m (8.25 ft) from head to tail and would normally weigh less than 20 kg (44 lb). They had clawed hands on their fore limbs and sharp, recurved teeth that were perfectly designed for slicing into prey.”