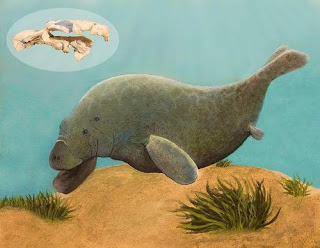 Ancient Pygmy Sea Cow Discovered
A McGill University researcher has discovered a near-complete skull of a primitive “dugong” illuminating a virtually unknown period in Madagascar fossil history.
The discovery of a Middle Eocene (48.6-37.2 million years ago) sea cow fossil by McGill University professor Karen Samonds has culminated in the naming of a new species. This primitive “dugong” is among the world’s first fully-aquatic sea cows, having evolved from terrestrial herbivores that began exploiting coastal waters. Within this ancient genus, the newly discovered species is unusual as it is the first species known from the southern hemisphere (its closest relatives are from Egypt and India), and is extremely primitive in its skull morphology and dental adaptations.
The fossil is a pivotal step in understanding Madagascar’s evolutionary history — as it represents the first fossil mammal ever named from the 80-million-year gap in Madagascar’s fossil record.
The research is to be published in the Journal of Vertebrate Paleontologyon December 12…
(read more: Science Daily)            (McGill University)
_______________________________________
Above story reprinted from materials provided by McGill University.
Posted by alisha marie [smiles] at 9:48 PM