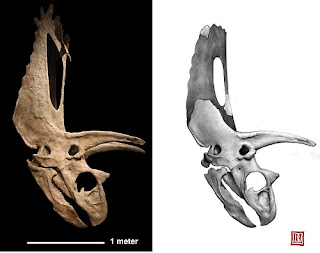 Recently Discovered Ceratopsian Dinosaur (2011)
by Linda Zhao
Nicholas Longrich, Department of Geology paleontologist, discovered a new dinosaur species, Titanoceratops, that may refine the evolutionary tree. This finding sheds light on how horned dinosaurs evolved into elephant-sized organisms.
The skeleton had previously been identified as a Pentaceratops, but only because it was found in the same location as previous Pentaceratopsremains. Upon seeing illustrations of the remains, Longrich determined that the skeleton was far too large to be a Pentaceratops. While dinosaurs rarely deviated from their average size, this skeleton was twice the size of a Pentaceratops.
Longrich isolated small differences in the skeleton’s morphology that consistently matched features of a Triceratops more than those of aPentaceratops. For example, Longrich identified a sinus that reached inside the nostril and into the palate, a characteristic typical of Triceratops but not of Pentaceratops. Altogether, subtle details in the skeleton’s nostrils, horns, snout, and frill confirmed what the large size of the skeleton suggested –Titanoceratops was a new species that was likely the ancestor ofTriceratops…
(read more: Yale Scientific)       (images: Nicholas Longrich)
Posted by alisha marie [smiles] at 11:44 PM