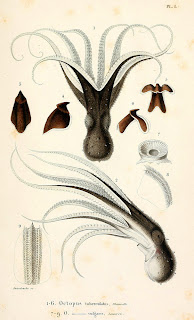 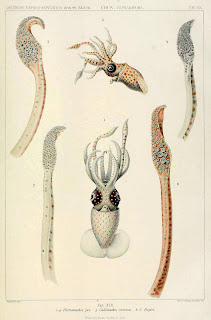 Limbs of the Cephalopoda
Whether squids, octopuses, and nautilus have “arms” or “tentacles” is often simply a matter of semantics, but the most accepted definitions (from what I’ve found) tend to define the “arm” as a tapered limb, with two rows of suckers along its entire length. “Tentacle” is typically a length of tapered limb with no suckers, leading to a distal club-like appendage, covered in suckers.One exception would be limbs in the nautilus - they have up to 90 un-suckered limbs, but their limbs are called “tentacles” by those who study them, even without the terminal club.
Images:Top: Octopus vulgaris and detail of beak and armsDetail of tenticular clubs in squid, from the Expedition of the ValdiviaArm of Illex illecebrosis (Northern Shortfin Squid)Bottom: Tentacle of Illex illecebrosis