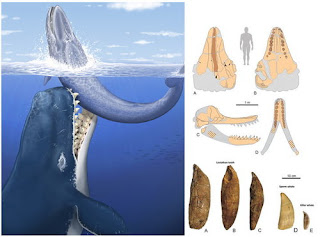 [Paleontology • 2010]
The modern giant sperm whale Physeter macrocephalus, one of the largest known predators, preys upon cephalopods at great depths. Lacking a functional upper dentition, it relies on suction for catching its prey; in contrast, several smaller Miocene sperm whales (Physeteroidea) have been interpreted as raptorial (versus suction) feeders, analogous to the modern killer whale Orcinus orca.
Whereas very large physeteroid teeth have been discovered in various Miocene localities, associated diagnostic cranial remains have not been found so far. Here we report the discovery of a new giant sperm whale from the Middle Miocene of Peru (approximately 12–13 million years ago), Leviathan melvillei, described on the basis of a skull with teeth and mandible. With a 3-m-long head, very large upper and lower teeth (maximum diameter and length of 12 cm and greater than 36 cm, respectively), robust jaws and a temporal fossa considerably larger than in Physeter, this stem physeteroid represents one of the largest raptorial predators and, to our knowledge, the biggest tetrapod bite ever found.
The appearance of gigantic raptorial sperm whales in the fossil record coincides with a phase of diversification and size-range increase of the baleen-bearing mysticetes in the Miocene. We propose that Leviathan fed mostly on high-energy content medium-size baleen whales. As a top predator, together with the contemporaneous giant shark Carcharocles megalodon, it probably had a profound impact on the structuring of Miocene marine communities. The development of a vast supracranial basin in Leviathan, extending on the rostrum as in Physeter, might indicate the presence of an enlarged spermaceti organ in the former that is not associated with deep diving or obligatory suction feeding…
Posted by alisha marie [smiles] at 9:33 AM