malcolm browne and the burning monk 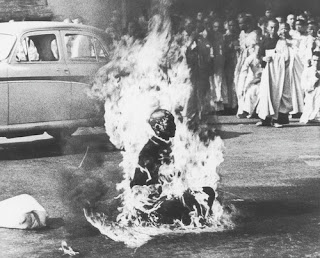 Malcolm Browne, ‘Burning Monk’ Photographer, Dead at 81
Malcom W. Browne on his photo and the Buddhist Protests of 1963 :

“Because of what I knew of the Buddhist tradition in Vietnam, I realized that it had to be taken seriously. So while other correspondents got tired of the endless Buddhist street demonstrations that were going on all that summer, I stuck with them, because I had the sense that sooner or later something would happen. I became a familiar presence at the main pagoda in Saigon. The monks knew that I appreciated their cuisine. We were friendly. One of them was a Yale graduate, as a matter of fact. And I was sincerely interested in what they were doing, quite aside from the news value of it.
One monk in particular would telephone me in advance the night before something was planned. One night he advised me to come to the pagoda at seven the next morning because something very special and important was going to happen. He sent the same message to half a dozen other American correspondents, but they all ignored it. I did not. That was all.
That morning a Buddhist monk went out and sat down in a main intersection in downtown Saigon. Two of his fellow monks poured gasoline over him, and he set himself on fire and died. I was there, the only western correspondent present and taking pictures. I suppose I took six or eight rolls of 35-millimeter film.
It was clearly theater staged by the Buddhists to achieve a certain political end. At the same time, there was a human element to it that was just horrifying, because the sequence of pictures showed the initial shock of the flames touching his face, and so forth. He never cried out or screamed, but you could see from his expression that he was exposed to intense agony, and that he was dying on the spot — and then, in the end, when the body was rigidly burned, they couldn’t stuff him into a casket because he was splayed out in all directions. As shock photography goes, it was hard to beat. It’s not something that I’m particularly proud of. If one wants to be gruesome about it, it was a very easy sequence of pictures to take. Work is a great panacea for the horrors of that sort of situation, or of a battle, for that matter. I think combat photographers are very conscious of the idea that the real fear comes later, after they get home and develop their film and have a look at what they were through. Then they are aware that they nearly died.
It was a picture that meant many things to many different people and interests. The Chinese and the North Vietnamese regarded it as a wonderful propaganda picture, and of course they labeled it “A Buddhist priest dies to oppose U.S. imperialism and its influence in Vietnam.” In the United States, it was regarded as a picture of a martyr who had died for a worthy cause, and therefore other Americans should support the overthrow of an autocratic Catholic government that had been supported by President Kennedy.
I’ve been asked a couple times whether I could have prevented the suicide. I could not. There was a phalanx of perhaps two hundred monks and nuns who were ready to block me if I tried to move. A couple of them chucked themselves under the wheels of a fire truck that arrived. But in the years since, I’ve had this searing feeling of perhaps having in some way contributed to the death of a kind old man who probably would not have done what he did — nor would the monks in general have done what they did — if they had not been assured of the presence of a newsman who could convey the images and experience to the outer world. Because that was the whole point — to produce theater of the horrible so striking that the reasons for the demonstrations would become apparent to everyone. And, of course, they did. The following day, President Kennedy had the photograph on his desk, and he called in Henry Cabot Lodge, who was about to leave for Saigon as U.S. ambassador, and told him, in effect, “This sort of thing has got to stop.” And that was the beginning of the end of American support for the Ngo Dinh Diem regime.”

From Reporting America at War: An Oral History, PBS.
Photo : Buddhist monk Thich Quang Duc sets himself ablaze in protest against the persecution of Buddhists by the South Vietnamese government, 1963. © Malcolm W. Browne/AP
Posted by alisha marie [smiles] at 9:43 PM