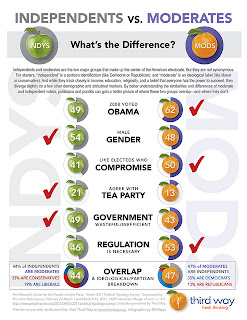 Independents vs. Moderates: What’s the Difference?
Independents and moderates are the two major groups that make up the center of the American electorate. But they are not synonymous.
For starters, “Independent” is a partisan identification (like Democrat or Republican), and “moderate” is an ideological label (like liberal or conservative). And while they track closely in income, education, religiosity, and a belief that everyone has the power to succeed, they diverge slightly on a few other demographic and attitudinal markers.
By better understanding the similarities and differences of moderate and Independent voters, politicians and pundits can gain a better picture of where these two groups overlap—and where they don’t.
For a deeper look at who, exactly, are “Obama Independents,” read our recent report: 2012 Showdown: The Battle for the Obama Independents.
This infographic appeared in the July 2012 Inside Politics Newsletter.
Posted by alisha marie [smiles] at 8:37 PM