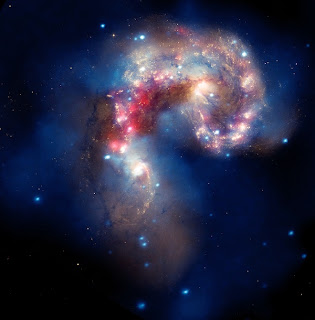 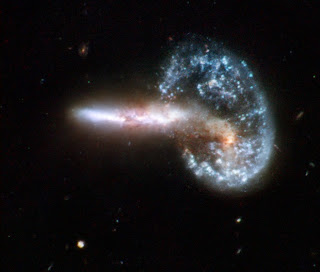 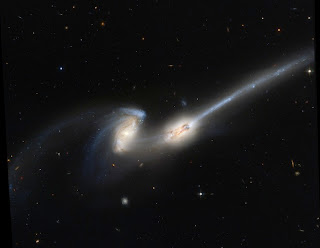 Galactic collisions are among the most ferocious and stunning events in our universe.
These cosmic pile-ups occur whenever galaxies become gravitationally attracted to one another. Multiple galaxies may spiral around each other for billions of years, creating odd distortions and beautiful trails of stars as they pass. Eventually, the objects crash together in a forceful embrace.
Since the first galaxies coalesced several hundred million years after the Big Bang, their collisions have been influential in shaping the history of our universe.
“As small galaxies merge, they make larger galaxies, and those will then merge to make still larger galaxies, and so on, up to and including the present-day galaxies,” said astronomer Kirk Borne of George Mason University.
Because of the vast distances between them, there's a low probability that stars within galaxies will actually hit head-on. But gravitational forces can wrest stars from their previous orbits, scrambling the shape of the galaxies involved.
Friction between diffuse gas and dust inside each galaxy raises temperatures, and interstellar material often combines into huge molecular clouds. All this mass in one place triggers prodigious star formation, with stellar birth rates increasing by a hundredfold.
The increased light from this extra star formation allows astronomers to see galaxy mergers in the distant universe, helping them learn about some of the earliest periods of cosmic history. Understanding how larger galaxies coalesce from smaller galaxies provides important information on our own cosmic origin story: the formation of the Milky Way galaxy.
The Milky Way formed through the long-ago merging of progenitor galaxies and is on course to hit our neighbor, the Andromeda galaxy, in about 4 billion years. Simulations indicate that the Earth and solar system won’t be destroyed in this collision, though the sun may be tossed into a brand new galactic region.
Along with other astronomers, Borne is a member of the Galaxy Zoo project, an online collaboration between scientists and interested citizens to sift through astronomical telescope datasets and classify galaxies and their behavior. His specialty is the Galaxy Zoo: Mergers project, which studies galactic collisions.
Their website has an online Java applet that lets anyone simulate galaxies smashing together. Just input parameters like the galaxies’ relative masses, collision speeds and angles, and then watch the results.
The applet's purpose is to find the initial conditions for different real-world galaxy collisions. Volunteers on the project have run more than 3 million simulations and found models describing 54 real-world galaxies, said astronomer John Wallin, the Galaxy Zoo: Mergers project lead.
The project's initial data was recently presented at a cosmology workshop in Santa Fe, New Mexico, and they're still looking for more help. Volunteers can participate in Merger Wars, where different simulated outcomes are pitted against one another to see which best describes actual galaxy collisions.
wired.com
Posted by alisha marie [smiles] at 8:31 PM