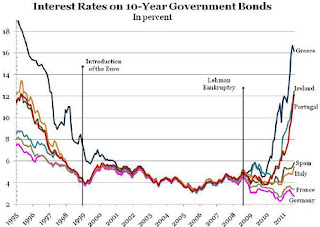 
When the euro was introduced the regulators allowed banks to buy unlimited amounts of government bonds without setting aside any equity capital; and the central bank accepted all government bonds at its discount window on equal terms. Commercial banks found it advantageous to accumulate the bonds of the weaker euro members in order to earn a few extra basis points. That is what caused interest rates to converge which in turn caused competitiveness to diverge.


Translation: European officials essentially told banks: Bonds from all euro zone countries are identical. It doesn't matter whether they're sold by Greece or Germany or whoever. They're all the same. So banks rushed to lend money to the weaker euro zone countries, and their borrowing costs plummeted.
2. The False Dream
For roughly a decade, it seemed that the dream of the euro was coming true. Borrowing costs were almost identical for all of the countries in Europe. But under the surface, Europe was actually growing apart. Soros writes:


Germany, struggling with the burdens of reunification, undertook structural reforms and became more competitive. Other countries enjoyed housing and consumption booms on the back of cheap credit, making them less competitive.


Translation: Germany got better at selling stuff to the rest of the world over the past decade. Other countries in Europe had a false sense of prosperity. They borrowed lots of money to buy stuff and build houses, and they got worse at selling stuff to the rest of the world.
The euro made it easier for Germany to sell stuff to countries on the periphery of Europe, both by making German goods cheaper for people in those countries, and by making it easier for people in those countries to borrow money to buy stuff from Germany.
3. The Crisis
After the financial crisis, it eventually dawned on everybody that the countries that shared the euro are, in fact, a bunch of different countries, with vastly different economies — and that, despite what the officials said, not all eurozone government bonds are identical.
Soros writes:


It took some time for the financial markets to discover that government bonds which had been considered riskless are subject to speculative attack and may actually default; but when they did, risk premiums rose dramatically. This rendered commercial banks whose balance sheets were loaded with those bonds potentially insolvent. And that constituted the two main components of the problem confronting us today: a sovereign debt crisis and a banking crisis which are closely interlinked.

Translation: Once everybody realized that some eurozone countries might not be able to pay back their debts, they started demanding higher interest rates to lend to weaker countries. That, in turn, hammered the banks that had loaned all that money to those weaker countries.
Those two, related problems — rising borrowing costs for weaker countries, and trouble for banks that have loaned money to those countries — are at the core of the European crisis.
BONUS: Why a euro zone breakup would be bad for Germany
Soros argues that, in the end, Germany will try to save the euro in order to protect its own interests. He writes:


...the likelihood is that the euro will survive because a breakup would be devastating not only for the periphery but also for Germany. It would leave Germany with large unenforceable claims against the periphery countries. The Bundesbank alone will have over a trillion euros of claims arising out of Target2 by the end of this year, in addition to all the intergovernmental obligations. And a return to the Deutschemark would likely price Germany out of its export markets...


Germany is likely to do what is necessary to preserve the euro – but nothing more. That would result in a eurozone dominated by Germany in which the divergence between the creditor and debtor countries would continue to widen and the periphery would turn into permanently depressed areas in need of constant transfer of payments.


Translation: The deep problem facing the euro zone isn't just debt. It's the vast gap between the economies in the struggling countries and the economies in the stronger countries. If Germany does the bare minimum to keep the euro afloat, those differences will persist — and the struggling countries will continue to struggle indefinitely.
Soros argues that Germany should do more than the bare minimum, to try to change the broader economic picture in Europe. But he says that's not likely to happen.
npr
Posted by alisha marie [smiles] at 3:27 PM