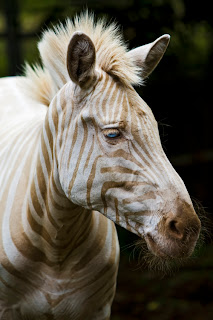 Zoe, born 9-16-98 on the Island of Molokai and is extremely rare.
Her unusual color is due to her having "amelanosis". She is not an albino. She has striking gold stripes and blue eyes. In horses, there is a similar condition called "Lethal White Foal Syndrome" which is associated with the occurrence of other serious birth defects. Although this color variation occasionally occurs in wild herds, the animals would likely survive only a few days at best. This is probably because zebras use their stripes as camouflage to blend in with the rest of herd. This then allows the herd, to confuse predators with the changing patterns formed by the movement of a large group. Animals that stand out from the herd are easy targets for predators. In nature, having a color variation that makes you stand out is not a good thing!
There have been reports of at least two other "white" zebras in captivity. One in Germany about a hundred years ago and another at a zoo in Tokyo in the 1970's.
threeringranch.org
Posted by alisha marie [smiles] at 7:19 PM