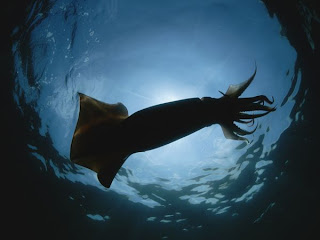 Living hundreds of feet deep in the eastern Pacific, jumbo squid frequently rise to the surface and will attack anything—including divers. Their average size is about four to five feet (one to two meters) long and 150 to 200 pounds (70 to 90 kilograms), but some behemoths can reach twelve feet (four meters), including tentacles. 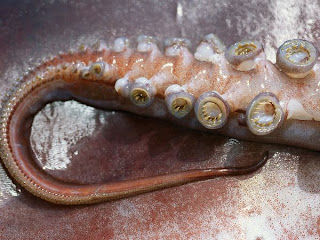 Squid on the hunt can whip out their feeding tentacles in about 20 milliseconds, almost faster than the human eye can see. Humboldt squid like this one have an added threat: tiny hooks embedded in their suckers to latch onto prey.
Posted by alisha marie [smiles] at 7:09 PM