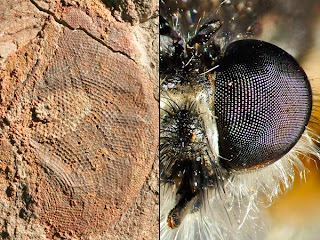 A half-billion-year-old fossil "compound" eye (left)—likely from an ancient shrimplike predator—was surprisingly advanced for its time and gave its owner vision comparable to those of modern insects, such as the robber fly (right), a new study says.
The fossil eyes were found on Kangaroo Island (map) in southern Australia and are estimated to be about 515 million years old.
Unlike human eyes, which have only one lens, the compound eyes of arthropods—including insects and crustaceans—have hundreds or even thousands of separate lenses.
"The owner of a compound eye sees the world as a series of dots. Each dot is generated by one lens in the eye, so the more lenses you have, the more detail you see the world with," explained Michael Lee, an evolutionary biologist at Australia's University of Adelaide.
"If you have very few lenses, you're going to see the world with very few dots—everything will look like very bad newsprint."
The research by Lee and his team was detailed in the June 30 issue of the journal Nature.