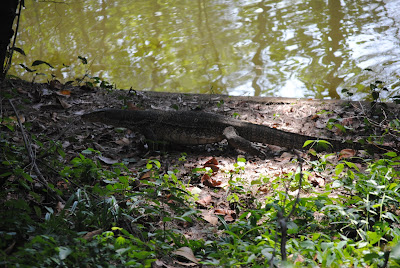 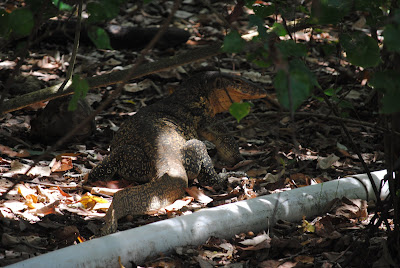 The Water monitor, (Varanus salvator) is a large species of monitor lizard capable of growing to 3.21 metres (10.5 ft) in length, with the average size of most adults at 1.5 metres (4 ft 11 in) long. Maximum weight ofVaranus salvator can be over 25 kilograms (55 lb), but most are half that size. Their body is muscular with a long, powerful, laterally compressed tail. Water monitors are one of the most common monitor lizards found throughout Asia, and range from Sri Lanka, India, Indochina, the Malay Peninsula and various islands off Indonesia, living in areas close to water.

Monitor lizards differ greatly from other lizards in several ways, possessing a relatively high metabolic rate forreptiles and several sensory adaptations that benefit the hunting of live prey. Recent research indicates that the varanid lizards may have some venom. This discovery of venom in monitor lizards, as well as in agamid lizards, led to the Toxicofera hypothesis: that all venomous lizards and snakes share a common venomous ancestor.
During the late Cretaceous era, monitor lizards or their close relatives are believed to have evolved into amphibiousand then fully marine forms, the mosasaurs, which reached lengths of up to 17 m.
It was also believed that snakes are more closely related to monitor lizards than any other type of extant reptile, but it has been proposed that snakes are sister group of the clade of iguanians and anguimorphs.
During the Pleistocene epoch, giant monitor lizards lived in Southeast Asia and Australasia, the best known fossil being Varanus priscus (formerly known as Megalania prisca). This species is an iconic member of the Pleistocenemegafauna of Australia.
Some monitor lizards, including the Komodo Dragon, are capable of parthenogenesis.
In Malaysia, this species is one of the most common wild animals around with numbers comparable to that of the population of macaques there. Although many fall prey to humans via road kill and animal cruelty, it still thrives in most states of Malaysia especially in the shrubs of the east-coast states such as Pahang and Terengganu. Malay "kampung" boys and young working class malay men often catch and kill water monitors for their own amusement although the widespread population of the species causes the lack of conservation attention. In the east-coast states of Malaysia, this species is very common in roadkill.
Varanid lizards are very intelligent, and some species can even count. Careful studies feeding V. albigularis at the San Diego Zoo varying numbers of snails showed that they can distinguish numbers up to six. V. niloticus have been observed to cooperate when foraging. One varanid lures the female crocodile away from her nest while the other opens the nest to feed on the eggs. The decoy then returns to also feed on the eggs. Komodo dragons, V. komodoensis, at the Smithsonian National Zoological Park in Washington, D.C., recognize their keepers and seem to have distinct personalities.
My pictures from Kuala Terengganu, Malaysia
Posted by alisha marie [smiles] at 8:13 PM