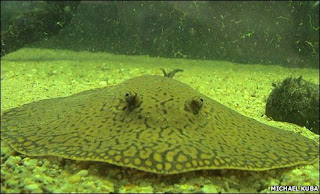 Testing the cognitive abilities of cartilaginous fishes is important in understanding the evolutionary origins of cognitive functions in higher vertebrates. We used five South American fresh water stingrays (Potamotrygon castexi) in a learning and problem-solving task. A tube test apparatus was developed to provide a simple but sophisticated procedure for testing cognitive abilities of aquatic animals. All five subjects quickly learned to use water as a tool to extract food from the testing apparatus. The experimental protocol, which gave the animals the opportunity of correcting a wrong visual cue decision, resulted in four out of five subjects correcting an error rather than making an initial right choice. One of five subjects reached 100% correct trials in the visual discrimination task. The ability to use water as an agent to extract food from the testing apparatus is a first indication of tool use in batoid fishes. Performance in the instrumental task of retrieving food from a novel testing apparatus and the rapid learning in the subsequent discrimination/error correction task shows that cartilaginous fish can be used to study the origins of cognitive functions in the vertebrate lineage.