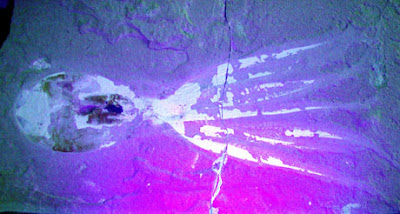 A fossil octopus found in Lebanon has dramatically changed zoologists' thinking on these creatures' historic origin.

An ultraviolet picture of the octopus fossil found in Lebanon, which is more than 95m years old. Photograph: Dirk Fuchs/Free University of Berlin

Keuppia levante is one of several newly discovered fossil octopus species found in Lebanon that challenge previous assumptions about the origin and age of the Octopoda. Along with Keuppia hyperbolaris and Styletoctopus annae, this species is now the earliest unequivocal fossil for the group.

Truly remarkable anatomical details were observable due to the fine-grained Cenomanian limestones in which these species were entombed 180-95 million years ago. Octopods were previously thought to have arisen in mid-Cretaceous times. Thanks to characters observed in these newly discovered species, scientists now think octopods appeared significantly earlier, possibly even in Jurassic times.

Quentin Wheeler is director of the International Institute for Species Exploration, Arizona State University
Posted by alisha marie [smiles] at 11:56 AM