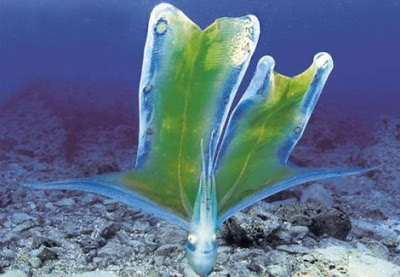 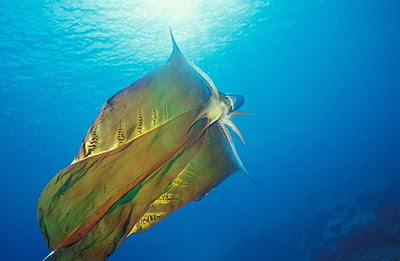 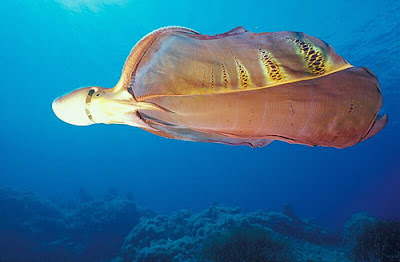 These species can be found in the open seas of the Mediterranean as well as the North and South Atlantic Ocean. Sightings are rare, making the Blanket Octopus an elusive and mysterious species.

The "blanket" is a defense mechanism, and a handy one too, as Blanket Octopuses do not have ink to ward off predators. Instead, the Blanket Octopus will unfurl its blanket, making it look significantly larger and intimidating, with the intention of scaring off whatever threatens it.
Interestingly, Blanket Octopus is immune to the poison of the Portuguese man o' war, a jellyfish-like invertebrate known for its deadly venom. Taking advantage of their immunity, Blanket Octopuses will rip off the Man o' war's tentacles and use them to defend themselves from attacks.

Males and females look as though their two different species! Female Blanket Octopuses may grow in excess of two meters in length, whereas males only reach a few centimeters. The males have a detachable arm in which sperm is stored. When it is time to mate, the male detaches its arm and lodges it into the female's mantle. The male dies shortly afterwards while the female goes on to carry over 100,000 eggs that she keeps attached to her until they are ready to hatch.