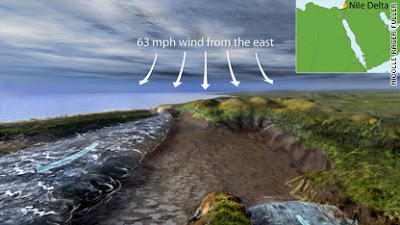 The parting of the waters described in the book of Exodus that enabled Moses and the Israelites to escape the pharaoh's army is possible, computer simulations run by researchers at the National Center for Atmospheric Research and the University of Colorado at Boulder show.

To test the theory that the biblical account may have depicted actual events, the researchers studied maps of the region, archaeological records and satellite measurements to find a topographical feature where such an event might have been possible. They settled on an area south of the Mediterranean Sea where some oceanographers say a branch of the Nile River drained into what was called the Lake of Tanis, a coastal lagoon 3,000 years ago.

The computer model shows a 63 mph east wind blowing across the area and its 6-feet-deep waters for 12 hours. In the scenario, the wind pushed back the waters into both the lake and the channel of the river, exposing a mud flat 2 to 2.5 miles long and 3 miles wide for four hours. As the winds died down, the waters quickly flowed back in and in theory would have drowned anyone on the mud flat.

“The simulations match fairly closely with the account in Exodus,” said Carl Drews of NCAR, the lead author of the study published in the online journal PLoS ONE. (Read the full study)

“The parting of the waters can be understood through fluid dynamics. The wind moves the water in a way that’s in accordance with physical laws, creating a safe passage with water on two sides and then abruptly allowing the water to rush back in.”

YouTube: Parting the waters, Part 1: The physics of a land bridge

Parting the waters, Part 2: Carl Drews on wind setdown research
The biblical account of Exodus has Moses and his followers trapped by the pharaoh forces against a body of water, which has been translated to both the Red Sea and the Sea of Reeds. In the account, a strong wind comes up after night falls and parts the waters behind the Israelites. Moses leads them into the breach but when the pharaoh army pursues them at daybreak, the gap disappears and the army is lost.

Previous research has focused on areas of the Red Sea near the modern-day Suez Canal where the biblical miracle may have been possible. The NCAR/CU team said their research shows those scenarios unlikely. They ran a series of 14 computer simulations to pinpoint the area where the parting of the waters was most likely.

“People have always been fascinated by this Exodus story, wondering if it comes from historical facts,” Drews says. “What this study shows is that the description of the waters parting indeed has a basis in physical laws."

Drews conducted the Exodus research as part of a larger project on how winds can affect water depths.