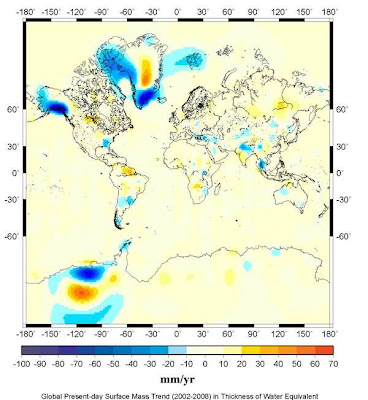 New estimates of ice melt from Earth's glaciers, made during a study tracking how water is transported across Earth's surface, find that the amount of ice lost to the seas is smaller than scientists previously thought. The new study also finds that Earth's center of mass is actually shifting.
Using new methods, the study researchers calculated new estimates of ice loss in Greenlandand Antarctica that are significantly smaller than previous estimates.
The new estimates reflect the role that post-glacial rebound was found to play in current ice loss in Greenland and Antarctica. Post-glacial rebound is the response of the solid Earth to the retreat of glaciers. After the weight of ice from the land surface was removed as glaciers retreated at the end of the last Ice Age, the land under the ice rose and continues to slowly rise.
The team, made up of researchers from NASA's Jet Propulsion Laboratory (JPL) in Pasadena, Calif., Delft University of Technology in the Netherlands, and the Netherlands Institute for Space Research also found that the shift of water mass around the globe, combined with post-glacial rebound, is shifting Earth's surface relative to its center by 0.035 inches (0.88 millimeters) a year toward the North Pole.
"The motion of the center moving upward is not going to affect life on earth. The motion is only less than one millimeter a year, so it won't have any impact on life, but if it were something like one centimeter, then there would be a huge amount of changes," said Xiaoping Wu of the JPL.
To calculate the changes, scientists combined gravity data from the NASA/German Aerospace Center Gravity Recovery and Climate Experiment (GRACE) satellites with measurements of global surface movements from GPS and a JPL-developed model that estimates the mass of Earth's ocean above any point on the ocean floor.
Wu thinks the shift of Earth's surface is due primarily to the melted Laurentide ice sheet, which blanketed most of Canada and a part of the northern United States during the last Ice Age tens of thousands of years ago. "The new estimate of shift is much larger than previous model estimates of 0.019 inches (0.48 millimeters) per year," Wu said.
Previous models used estimates of the movement of mass at Earth's surface and were calculated by correcting the data using a post-glacial rebound model. In addition, the estimates of post-glacial rebound have also been estimated using a hydrological model. These are not as precise as the new method, and contain unknown and potentially large errors that can throw off estimates.
"We went a step forward to solve for both of these at the same time, previous studies collect data and fix it using different models, and we weren’t fixing anything for any model," Wu told OurAmazingPlanet. "Models aren’t as accurate as modern geodetic data. We want to improve these models by using more than one type of data and being more specific."
"The Earth system is so complex that measuring and understanding it requires scientists to combine observations from as many satellites and ground-based measurements as possible," said study team member Michael Watkins of JPL. "With each new study like this one, we learn more and more about how to conduct future studies and interpret their data. The more data and different types of data we collect, the better we'll be able to answer fundamental questions about how our planet works."