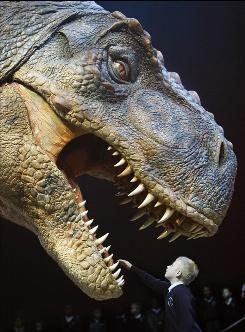 By Dan Vergano, USA TODAY
It's good to be king, just askTyrannosaurus Rex.
The "Tyrant Lizard King" stood about 13 feet tall, was 42 feet long and crushed the bones of other dinosaurs — including its brethren— with a 3,000 pounds of force bite.
But even the king has to start somewhere, and the latest discoveries suggest theking started out small.
"Tyrannosaurs were more like wolves for most of their history," says paleontologistStephen Brusatte of the American Museum of Natural History in New York. "Not the lion, not the apex predator."
In a review in the current Science journal, Brusatte and colleagues sum up the remarkable run of tyrannosaur discoveries, five in the last year, about a dozen in the last decade, which have transformed our picture of the iconic creature of the Age of Dinosaurs.
Only last September, a team led by Paul Sereno of theUniversity of Chicago unveiled Raptorex, some 125 million years old, an 8 foot-long tyrannosaur about 1% (maybe 143 pounds) of the size of a full-grown T. Rex. Despite the size difference, Raptorex possessed the tiny hands, long legs and solid skull of its larger descendants.
Even smaller was Dilong, a waist-high, 5-foot-long tyrannosaur reported in the journal Nature in 2004, that ran around China more than 128 million years ago. Dilong, like other tyrannosaurs, showed evidence of filamentary "protofeathers" covering its hide, suggesting they were brightly-colored beasts. (Tyrannosaurs belonged to the "therapod" family thought ancestral to modern-day birds, and such protofeathers intrigue scientists studying the origins of flight.)
Unlike T. Rex, which reigned from about 85 to 65 million years ago and likely lumbered about at a 25 mph top speed, the ancestral tyrannosaurs were likely the "Jackals of the Jurassic," in the words of paleontologist Thomas Holtz of the University of Maryland. Raptorex and other tyrannosaurids likely lived in fear of larger beasts like Giganotosaurus, the large (as the name implies, rivaling T. Rex for size), big-eyed and fleet top predators for much of the time that dinosaurs roamed the Earth.
Still, those smaller tyrannosaurs were still likely no fun for other creatures, as the evidence suggests they were "gregarious," the review says, perhaps running down prey in packs like wolves.
"Most tyrannosaurs were between the size of a labrador and an ostrich for most of their history," Brusatte says. "Tyrannosaurus Rex was really an aberrant tyrannosaur, with its size. And they really don't appear until the end of things for dinosaurs."
So how did T. Rex end up king of the hill?
"Another 5 or 10 more fossils may tell us that story," Brusatte says. Most likely, some undocumented extinction event about 90 million years ago wiped out the top predator class of Allosaurids in North America and Asia. Tyrannosaurs filling the rung one below them on the carnivore ladder evolved into T. Rex to fill the empty top predator niche.
The finds of the last decade also show that Tyrannosaurus Rex's underwent big physical changes over a lifetime, growing from fleet-footed, skinny juveniles like their ancestors to thick-skulled heavyweights in adulthood (sounds familiar.) In the past, some juvenile T. Rex fossils were actually mistaken for entirely new species.
Given their gregariousness, T. Rex juveniles may have operated as the hounds of their packs, running down prey for the adults to finish off, or steal from them.
"Our understanding of tyrannosaurs is tremendously improved over the last decade," Brusatte concludes. "People love tyrannosaurs, but scientists certainly do too, as I think all these discoveries attests."
http://www.usatoday.com/tech/science/columnist/vergano/2010-09-17-tyrannosaurus-review_N.htm?csp=obnetwork
Posted by alisha marie [smiles] at 12:37 PM