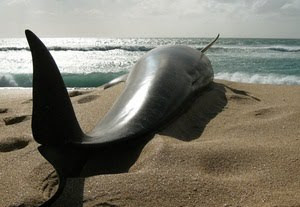 Conservation officials say at least 40 out of 80 pilot whales that stranded themselves on a remote northern New Zealand beach have died, and more whales are joining them on the beach.
About 50 more have been spotted just offshore from Spirits Bay beach in Northland, the northernmost tip of New Zealand.
The pilot whales were discovered by authorities Wednesday morning. Twenty-five of them were dead by the time workers from the Conservation Department arrived on the scene; several more had to be euthanized because of injuries from being tossed around in rough seas along the rocky coastline.
Because of the heavy seas, officials have decided to try to truck the heavy whales to a safer beach about an hour south for refloating. Volunteers from several whale rescue organizations, as well as the local Maori community, have turned out to help. The rescue effort is expected to last throughout the night as gale-force winds and heavy swells pound the area.
It's the second recent mass beaching in the region. Just last month, 60 whales stranded themselves on a nearby beach; only nine were successfully returned to the sea.
New Zealand has one of the world's highest rates of whale strandings, mainly during their migrations to and from Antarctic waters, one of which begins around September.
http://www.npr.org/templates/story/story.php?storyId=130047891
Posted by alisha marie [smiles] at 2:12 PM