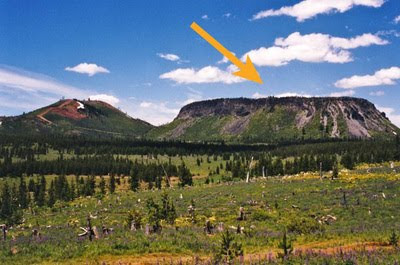 (1) It is low and broad.
(2) It has a relatively flat top.
(3) It is steep-sided.
(4) If you look real close, you can see crudely columnar jointing in the some of the outcrops near the top.
(5) If you had a piece of it in your hand, you'd know it was a volcano rock (andesite, very rarely you can find bits that are quite glassy).
(6)(And right next door to this feature is a reddish cone that is obviously a cinder/scoria cone.

So, what is it? How can you construct a flat-topped volcanic landforms with features that indicate a strong cooling gradient (columnar jointing, glassy material) when right next door is lava erupting to form a cinder cone?

A tuya is a subglacial volcanic landform formed when there are eruptions that cannot penetrate the ice sheet above, thus forming a flat-topped hill that conforms to the bottom of the ice (after some has melted away of course). This tuya in question is found in theCentral Oregon Cascades - Hayrick Butte - and it is one of a few tuya found in the High Casacades of Oregon. Much of the evidence of its subglacial origin has been removed by other erosional glacial processes, but there are still places where you can convince yourself that the columnar jointed formed by lava meeting ice are still present. The steep sides formed because the lava erupted couldn't flow far due to the ice surrounding it. Ice-contact eruptions can form quite impressive glassy pillows - the image below is a ice-contact pillow I collected from North Sister in Oregon and the groundmass of the lava is a shiny, dark grey glass on the outer edges but much stonier in the interior, away from the direct contact with the ice. You can also find evidence for subglacial or at least ice-melt influenced explosive volcanism in the Central Oregon Cascades - this takes the form of highly altered tuff deposits on North Sister. 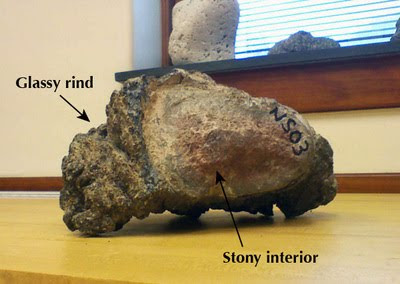 Ice-contact pillow collected from North Sister volcano, Oregon. Note the dark, glassy (and puffy) rind with a grey/red stony interior. The glassiness is formed by direct contact of the lava with ice. Click on the image to see a larger version. Image by Erik Klemetti.

Hayrick Butte likely formed during the height of the last ice age during the Pliocene, while the nearby Hoodoo Butte (the scoria cone) was not formed subglacially, thus its more typical cone-shaped profile. So, maybe a few thousand years separated these two volcanoes, but they ended up with very different surface expressions controlled by whether they erupted into air or underneath a kilometer-thick ice sheet. This tuya is also great evidence that there was once an ice sheet over the Central Oregon Cascades (at least locally) where todayfew glaciers remain.