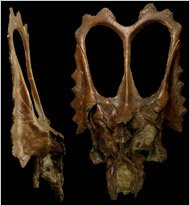 When Nicholas Longrich stumbled upon a fossilized fragment from a previously unknown dinosaur genus in the basement of the American Museum of Natural History in New York, he rejected the traditions that usually govern dinosaur nomenclature.

Those conventions would have Mr. Longrich, a postdoctoral associate at Yale, name the dinosaur after the area in which it was found, or use a Latin or Greek root for a physically distinctive feature. That is, after all, the method he used for three other genera he has named: Hesperonychus, Albertonykus, and Texacephale.

Instead, over a round of drinks with fellow paleontologists, Mr. Longrich struck upon, almost out of thin air, a name that would end up bringing him more publicity than any of his other discoveries: Mojoceratops.

The dinosaur, a large plant-eater marked by its gaudy heart-shaped headgear, lived about 75 million years ago in the late Cretaceous period. Its fossils are found in Canada’s Alberta and Saskatchewan provinces.

Although the initial inspiration for the name was not based on any real rationale, Mr. Longrich said, his later investigation into the etymology of the word “mojo” — a term for magical charm, especially that used to attract sexual partners — provided some justification for the choice.

“That’s what I think these frills were for, probably impressing mates,” said Mr. Longrich, whose finding was published this week in the Journal of Paleontology. “It actually worked out as not being completely irrational.”

Mr. Longrich confirmed the discovery of the new genus, he said, after realizing that the Mojoceratops fossil displayed in the American Museum of Natural History in New York had been restored decades ago to look similar to dinosaurs in the Chasmosaurus genus, whose members display short horns and a rectangular frill.

Paleontologists originally thought the Mojoceratops was part of that genus, and used plaster to restore the fossil to make the two specimens look identical.

“That back edge of the skull was modeled after this other dinosaur and obscured the fact that this was something different,” Mr. Longrich said. “Over 75 years people hadn’t recognized this was partly fake.”