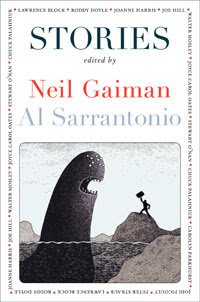 This collection contains 27 new stories from writers like Stewart O'Nan, Chuck Palahniuk, Carolyn Parkhurst, Roddy Doyle, Walter Mosley, Jodi Picoult and many others not known for their fantasy work, at least not as the term's currently defined by publishers. And that, according to anthologists Neil Gaiman and Al Sarrantonio, is the whole point. They offer up the book to argue that "imaginative fiction" can and should be a big tent, encompassing a great deal more than dungeons, dragons, swords and sorcery. All of these stories involve the uncanny, but they do so in appealingly diverse ways.

Some, like "Fossil-Figures," Joyce Carol Oates' lyrical tale of brotherly love (and hate), and O'Nan's true-crime "Land of the Lost," brush only lightly against the otherworldly. Others, like Gene Wolf's lonely outer space creeper "Leif in the Wind," jump feet-first into the turbid waters of genre only to emerge ... somewhere else.

Anthologies are, by their nature, mixed bags. Here it comes down to confidence and restraint: Where writers like Gaiman and Peter Straub, who've walked the dark forest of the imagination for years now, know how to deftly assert a given reality so that we never question its integrity, other stories in Stories insist so strongly on their own rules that the spell breaks. But long after the relative merits or faults of the individual tales fade, what lingers with the reader is the collection's cumulative effect: a renewed sense of openness, of endless possibility — and that, Gaiman notes in his introduction, is why we tell ourselves stories in the first place. (Read "The Devil On the Staircase," Joe Hill's story about a bricklayer's son who discovers a flight of "crooked" stairs that he thinks goes "way down to the sea." No, his father cautions ominously, "They go farther than that.")