Scientists have discovered a macabre death scene that took place 67 million years ago. The setting was a nest, in which a baby dinosaur had just hatched from an egg, only to face an 11-foot-long snake waiting to devour it.

The moment was frozen forever when, apparently, the nest was buried in a sudden avalanche of mud or sand and everything was fossilized.

The discovery was made by Jeffrey Wilson, a professor at the University of Michigan. He had heard about the amazing fields of dinosaur eggs discovered in India.

Wilson visited a scientist in India who showed him a broken, fossilized egg encased in a briefcase-sized block of stone. He leaned in to take a closer look and saw something else.

"I was stunned when I saw it," Wilson says, "because, sort of leaping out at me, were the peculiar articulations between the vertebrae of a snake, and so I had no idea that there would be a snake there but there it was sitting in front of me."Uncovering A Dinosaur Death Scene

With permission from the Indian government, Wilson put the stone in his backpack and flew home. He emphasizes that he did not check the bag. 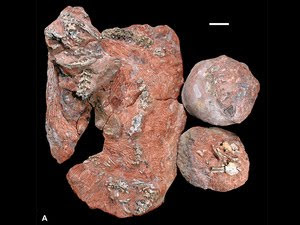 Wilson spent a year cleaning the stone. Bit by bit, it revealed more of the egg and more of the snake. But it's what the snake was doing that turned this rare find into something even more unusual — a grim tableau right out of a science fiction movie.

The snake was coiled around the broken eggshell. "Next to that coil, eggshell, skull, was a solid egg, and another solid egg, and then some larger bones," says Wilson.

Those bones belonged to a baby sauropod. Full-grown sauropods were the vegetarian 100-ton giants of the dinosaur world. But the baby was only about a foot-and-a-half long. It had apparently just hatched from that broken egg. The snake, about 11 feet long, had been waiting for the baby to hatch in order to eat it. 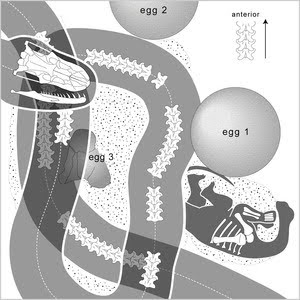 Wilson says scientists have since found three snake fossils and more eggs at the same site this one came from. They add new details to a 67-million-year-old story, says Wilson.

"The sauropods, these big dinosaurs, would come in, they would use their hind limb and probably kick out a small depression," Wilson says. "They would squat down they would lay a clutch of six to twelve eggs, they would cover it up with a little layer of sediment and maybe some vegetation and then they would leave it."

And the snakes knew that.

"It's 'Anaconda meets Jurassic Park,' " says Jason Head, a paleontologist at the University of Toronto who worked with Wilson's team. "These sauropods would lay these huge fields of eggs that we find in India, just kind of kilometers of dinosaur eggshell, and so with these hatchling dinosaurs it must have just been a smorgasbord where a whole ecosystem of predators could basically come in and feed on them."

In this case, a sudden avalanche of sand or mud must have intervened and buried both prey and predator like the human life scenes entombed by the eruption of Pompeii.

The scientists call the snake Sanajeh indicus. It did not have a modern snake's jaw, which basically unhinges so the snake can swallow large prey, but instead had a jaw more like a lizard.

Head says the snake probably made up for that by growing very large. So did the sauropods, which probably grew very fast as well, given their apparent tastiness.

The discovery is described in the journal PLOS Biology.