In this study, the authors took some sheep, and got them off twice in a row, storing the semen in the freezer, and then checking to see how the semen kept.

Now how do you get a sheep off? Particularly one that may not be best pleased with you? Well, you knock it out first (duh). Then you electro-ejaculate it. Take some electrodes. Attach near the perineum and prostate. In the case of the sheep, that means through the rectum. *ZAP* Ejaculation!

And you do this 10 minutes apart.

You might be wondering, why on earth would anyone jack off a sheep twice in 10 minutes?! Good reason. Say you're in the wild. You're trying to helping a declining population and you need some sperm. Chances are, any animal you catch isn't going to give you a lot of time, even if you DO knock it out. You need to get it off and get it off quick, as many time as you can, for as much usable sperm as you can. Simple.

But the question is: is it the same ejaculate every time? Is one ejaculate better or worse than another?

Well we're going to look. And for us to look, I'm going to have to GRAPH. Stupid tables. A picture is worth 1000 words, authors. Pictures!!!

Here we go then. 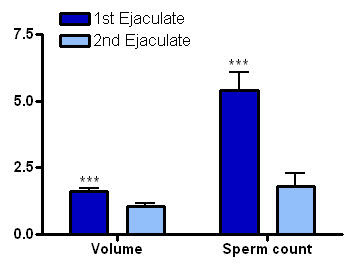 You can see there the 1st ejaculate in dark blue and the 2nd in light blue. The volume in mL is on the left, and the sperm count on the right. It's pretty obvious (I did the stats too, it's all for a love of data) that the second ejaculate isn't as good as the first in terms of both volume and sperm count (of course the lower volume contributes to the lower sperm count).

But what was interesting was when they cooled and froze and thawed the semen. This is important, as you're going to have to get it back, possibly save it for later, and then get it into a female. So they cooled, froze, and thawed their ejaculates, and looked at sperm motility, which is a good measure of whether the sperm have got it in them (and graphed it, good little scientists):

You can see up there that the second ejaculation (in the grey bars) actually survived cooling BETTER than the first ejaculate.

Sci wants to see a bigger study. I want to see second ejaculates (from different sheep or different days) at 10 min, 30 min, and an hour. What if 30 min and an hour are much better as far as second ejaculate quantity? If another 20 minutes makes a difference, Sci says it's probably worth keeping the animal out for that long. An hour...well maybe try to catch it again? :)

And that's your Friday Weird Science. On Monday, we're back with...what might seem to be more weird science. Get ready, and ejaculation post is coming at you (oh yes, Sci went there).