Two new critters have just been added to the odd Cambrian menagerie. 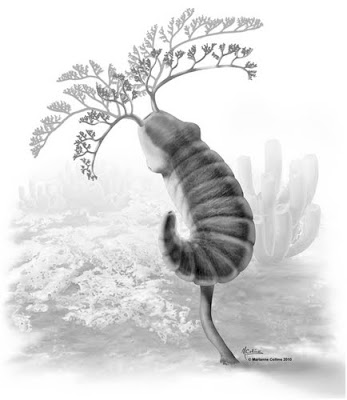 A restoration of Herpetogaster collinsi by Marianne Collins. From Caron et al, 2010.
What was three centimeters long, had bilateral symmetry, and grew tentacles out of its head? According to paleontologists Jean-Bernard Caron, Simon Conway Morris, Degan Shu, it was Herpetogaster collinsi, the latest fossil to be named from the famous 505 million year old Burgess Shale of Canada. As described in PLoS One, this small invertebrate may have attached itself to sponges by way of a structure called a stolon, and there it waited for tiny prey to drift into its tentacles. The fact that so many have been found in close association suggests that they often lived in close proximity, so perhaps sponges were the hot hangout for this strange suspension feeder.

Hypothetical positions of Herpetogaster collinsi and its relatives to other organisms. From Caron et al, 2010.
But just what kind of animal was Herpetogaster? It shows some resemblance to both an enigmatic Cambrian animal from China's Chengjiang fauna named Phlogites and members of another group called eldoniids, but this is not especially helpful since these previously-known forms have been just as tricky to interpret. According to Caron, Conway Morris, and Shu Herpetogaster and its relatives could be closely related to echinoderms (sea stars, sandollars, and the like), hemichordates (worm-like organisms such as acorn worms), or then then again may be close to the common ancestor of both groups. At present it is difficult to test these competing hypotheses, but regardless of where Herpetogaster ultimately falls in the evolutionary tree it was certainly a fantastic creature. 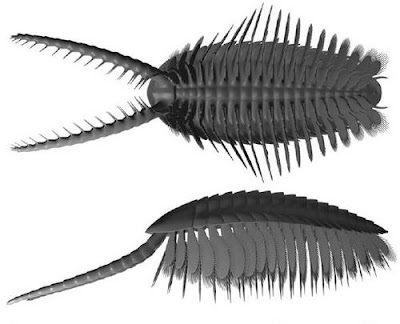 Two computer-generated restorations of Kiisortoqia soperi (above- a view of its underside; below-a view from the side). From Stein, 2010.
The other newly-announced Cambrian creature, described by Martin Stein in the Zoological Journal of the Linnean Society, is quite different from the small suspension feeders scrutinized by Caron and colleagues. Found in the Early Cambrian (~540-510 million years ago) rocks of North Greenland, Kiisortoqia soperi was an arthropod with a simple head shield, a segmented body, and two long appendages sticking out in front of it. As bizarre as it was, however, Kiisortoqia had affinities to both "true" arthropods and a group of marine predators called anomalocaridids, all of which had modified versions of the same grasping appendages. As yet the exact feeding habits of Kiisortoqia are unclear, but if it was anything like its relatives it probably snatched prey out of the water with its appendages. The spikes along the structures would have helped to impale prey, and as they coiled around the food item it would have been brought back to the mouth of Kiisortoqia.