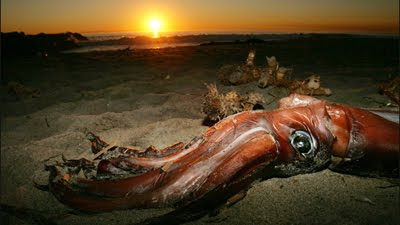 Giant squids! Sorry to startle you, but we're just so excited. You see, they're giant squids! And they're invading California beaches by the hundreds! And in a heavily attended press conference this morning, they announced plans to star in their own reality show!
OK, so maybe that last one hasn't happened (yet), but the rest of it is the honest-to-god truth. An article from the AP explains that the squids weigh up to 60 pounds each, but most tip the scales somewhere between 20 and 40 pounds. And, yes, they squirt ink when irritated.
Web searches on the giant squids (GIANT SQUIDS!) are already off the charts. One-day spikes on both "giant squids" and "giant squids in california" surged from near-zip into the thousands. Folks clearly want to see these gargantuan creatures for themselves.
Despite their intimidating heft and tendency to spew ink, the squids aren't scaring off local fishermen. As of today, around 400 of the giant squids have been nabbed by anglers. That number is likely to rise. An article from San Diego 6 explains that locals "started booking twilight fishing trips over the weekend to catch them."
The last time the giant (aka “jumbo” aka “Humboldt”) squid made waves in Search came last September, when a record-breaking 19 ½-foot-long, 103-lb beast was pulled from the Gulf of Mexico.
Now they're back with a vengeance. Wanna see the new ones for yourself? MyFoxLA hosts a collection of photos of nabbed squids.