Location: The Afar region of Ethiopia.
Height: 613 m / 2,011 feet
Tectonic setting: Erta Ale (meaning "smoking mountain") is part of the East African Rift, where the African Continent is tearing apart along a seam that runs from the Red Sea/Gulf of Aden (two other arms of the rift themselves) south through eastern Africa. Many of the large lakes of eastern Africa such as Lakes Albert, Tanganyika, Nyasa and Kariba fill rift valleys created by the cracking of the continental plate from rising asthenopheric mantle. This upwelling produces the magma underneath the rift.
Type: Shield volcano
Hazards: Lava flows - the volcano has a long-lived active lava lake, possibly as long as the last 100 years (Oppenheimer and Francis, 1998). There is also evidence of more explosive eruptions (VEI 2) in the last 150 years from Erta Ale, but its remote location makes accurate records sparse.
Monitoring: There is not much in the way of nearby monitoring of Erta Ale, as the eruption of Dallafilla in 2008 shows - there was no one on the scene to find out which volcano in the range (conveniently also called Erta Ale) had erupted. Most eruptions in the area are first noticed by their sulfur dioxide plumes or the lava lakes by satellite, then by reports from the few locals who live near the volcano. 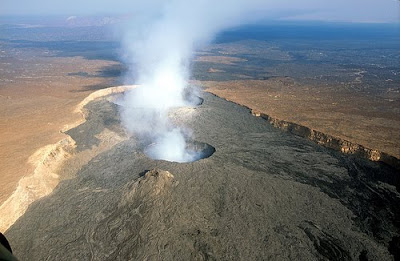 Summary: Erta Ale is one of the most remote volcanoes in the Afar region of Ethiopia part of the East African Rift. It is rarely visited and most of our knowledge of the volcano's activity comes from remote sensing data. The volcano itself is a large shield volcano with the typicalsummit caldera with craters that we see at many shield volcanoes. This summit caldera is more unique, though, thanks to the long-lived lava lake that sits in the summit crater pit. Over the last 100 years, this lava lake is sometimes joined by a second lava lake. Studies of the lake surface temperatures suggest that the flux of lava through the lake (at least in the late 1990s) is ~510-580 kg/s of basaltic lava (Burgi, 2002). Fresh-looking lava flows on the flanks of Erta Ale indicate that the lava lake will periodically overflow (as it may have in 2005), sending lava flows down the slopes of the volcano - this is a significant hazard, as superheated lava from a lava lake at Nyiragongo breached in 1977, sending lava downslope at ~100 km/h (60 mph) and killing 70 people. Most eruptions are sourced from the summit caldera area, however there have been rift vent eruptions along the northern flank of the volcano as well.
Current status: Just this week, new reports arrived that the lava lake at Erta Ale has risen to just 20 meter below the rim of th summit crater pit. Last year, an expedition visited the volcano and noted several changes since the last visit in 2002, including changes in the crater shapes and alignments at the summit.
Notable Recent Eruptions and History: An eruption of Erta Ale in 2005 forced evacuations of the region near the volcano and killed 250 heads of livestock. This eruption followed an M5.5 earthquake in the region. The volcano erupted again in 2007, prompting evacuations again, and possibly killing 5 people.
Mitigation: Evacuations are common near Erta Ale when eruptions begin, and geologists from the University of Adis Adaba usually respond quickly when evidence arises that the volcano may be erupting. 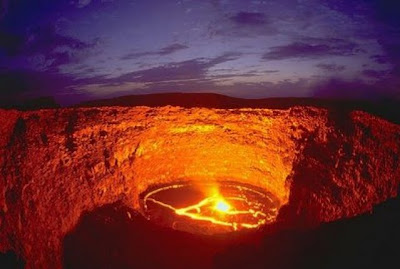