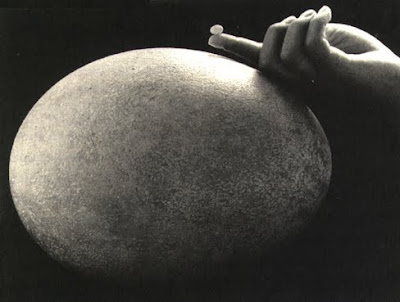 Elephant bird, Aepyornis maximus, egg
compared to a human hand with a hummingbird egg balanced on a fingertip.
But I was surprised to learn that avian DNA can also be extracted directly from fossilized eggshells -- eggshells that completely lack eggshell membranes.
An international team of scientists just published a paper demonstrating for the first time that fossil eggshells are a rich source of DNA.
"Researchers have tried unsuccessfully to isolate DNA from a fossil eggshell for years," reports first author Charlotte Oskam, a doctoral student in biology at Murdoch University in Perth, Western Australia.
"It just turned out that they were using a method designed for bone that was not suitable for a fossil eggshell."
According to Michael Bunce, a professor of biology at Murdoch University, extracting DNA from bone involves removing all the calcium from the bone. This calcium extract is then discarded -- a mistake when dealing with eggshells.
"Turns out that the DNA is trapped within the calcium carbonate matrix," said Dr Bunce.
Using their newly developed method, the team isolated ancient DNA (aDNA) from a variety of fossil eggshells, including a 19,000-year-old emu eggshell as well as eggshells from an extinct species of giant moa, Dinornis robustus, and the enigmatic elephant bird, Aepyornis maximus, from Madagascar. Eggshells from two other extinct species, the little bush moa, Anomalopteryx didiformis, and the heavy-footed moa, Pachyornis elephantopus, both from New Zealand's north island, were estimated to be more than 3,000 years old. Attempts to isolate DNA from a 50,000-year-old flightless Australian Thunderbird, Genyornis, failed because the DNA was too fragmented.
The data shows that the aDNA almost certainly comes from the mother rather than the developing embryo. As the developing egg moves through the hen's oviduct, some the mother's cells are mixed in the calcium carbonate shell as it thickens.
Eggshell is already used for a variety of scientific tests, such as radiocarbon dating and isotope analysis, which provides important information about diets, environments, past biodiversity and evolutionary processes. But obtaining genetic information from both mitochondrial and nuclear DNA isolated from the same samples promises even richer reconstructions of evolutionary history than is currently possible.
The aDNA has not yet been sequenced, but researchers are working on expanding their catalogue of aDNA samples from extinct birds: currently they are extracting genetic material from eggshells held in museums and excavated at archaeological and fossil sites throughout the world.
Combining this newly-devised aDNA extraction method with older, more established techniques will provide more clues into the lives of these ancient birds, and may shed some light on why they mysteriously died out.
The extinction of Aepyornis is especially mysterious. This giant bird lived on Madagascar for nearly 2 million years, but went extinct by the middle of the 17th century. Related to other ratites like the ostrich and emu, the herbivorousAepyornis was approximately 10 feet tall and weighed roughly 1,000 pounds, making it the heaviest bird to ever live (at 11 feet tall, the now-extinct giant moa is the tallest bird to ever live). It is thought that Europeans saw (and were impressed by) this giant bird before it went extinct.
"This mysterious bird was probably the inspiration behind stories in the Thousand And One Nights as told by Marco Polo," said study co-author Mike Parker-Pearson, an archaeologist at the University of Sheffield in the UK.
Even though it's known that Aepyornis went extinct after the arrival of humans on Madagascar, there's actually no convincing evidence that the bird was hunted by humans.
"There's not even evidence that they ate the eggs -- even though each one could make omelettes for 30 people," remarked Dr Parker-Pearson. 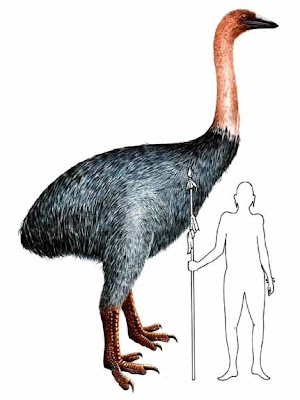 It is possible that humans might have destroyed the birds' habitat or perhaps their domestic animals, such as dogs and pigs, hunted and ate Aepyornis eggs and chicks, which then drove the species to extinction.
"It's amazing that we now know so much about its genetic make-up, its diet and its habits," said Dr Parker-Pearson. "Sadly, it seems to have been yet another casualty of human population growth."
Will it be possible to use aDNA to resurrect these long-extinct birds? Unfortunately, this is unlikely: although aDNA can be sequenced, scientists must know how to correctly repackage the DNA into chromosomes, those giant molecules that contain millions of genes. This is the same challenge facing scientists who wish to bring woolly mammoths back to life, even though mammoth DNA was sequenced from well-preserved specimens recovered from the Siberian permafrost.
"As with all ancient DNA, the DNA we isolated from eggshell is very fragmented," Ms Oskam pointed out. "It will be possible to sequence extinct genomes from fossil eggshell but it is a huge leap to imagine we can clone an extinct species."
Posted by alisha marie [smiles] at 8:47 PM