Teratology is so interesting — it gives us hints about the mechanisms driving developmental processes. In some cases, when you just have a few isolated instances, it can be frustrating, because there isn't enough information to go much beyond speculation. Here's one of those tantalizing cases: an octopus with branching tentacles. 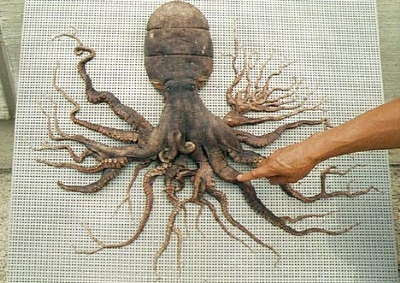 Now that is fascinating. Look at limb formation as an abstract developmental problem in which you first have to initiate a protrusion from a specific place on the body wall; the protrusion has to elongate to a specific length; and it has to be patterned along its length. Cephalopod limb patterning doesn't involve any branching elements, unlike vertebrate limbs which show a limited radiation of bony elements as you go distally. Vertebrates can exhibit phenomena like polydactyly which are basically counting errors or expansions of a field; the mechanisms for that don't seem likely to be the case in cephalopods. What I'd guess is that this is an example of errors in initiation. Whatever the signal is that triggers limb extension from the body was triggered again and again as the arm grew, creating sub-arms and sub-sub-arms. This could be a consequence of a mutation that lifted normal constraints that pattern limb initiation (this animal lived for some time, and produced offspring with normal limbs, all of which died shortly after hatching, unfortunately, a result that is ambiguous in determining whether the problem is genetic), or it could be an environmental signal that mimics the normal developmental signal. You can't tell from one dead octopus!
Posted by alisha marie [smiles] at 5:01 PM