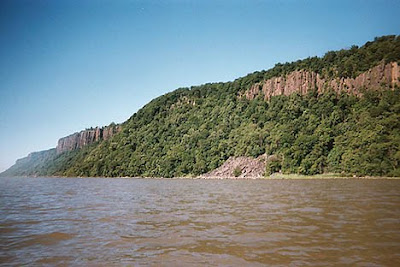 Here's some interesting research on the storage part of the carbon capture and storageequation: Researchers from Columbia University's Lamont-Doherty Earth Observatoryreport that several sites of igneous rock off the east coast of the United States have superior potential to store CO2 from power plants. Compared to onshore locations, undersea storage in these locations has "significant advantages" the study says:

The undersea formations in question are made of basalt, the same type of rock which forms the Palisades in New Jersey as well as sites in other locations.

Areas Around NYC, South Carolina, Georgia Considered
The Columbia Univ. scientists have identified four areas greater than 1000 square kilometers off the coasts of northern New Jersey, Long Island, and Massachusetts. Other locations are further south, with the largest being off of South Carolina and Georgia.

Previous studies have proposed to store CO2 in sedimentary formations on land, where concerns about leakage (among other things) make the proposal controversial.

Drilling Needed to Confirm Site Suitability
Currently all locations have been determined by seismic and gravity measurements. Study lead author David Goldberg says, "We would need to drill them to see where we're at. But we could potential do deep burial [at the NYC metro area locations]. The east coast makes sense. That's where the people are. That's where power plants are needed. And by going offshore, you can reduce risks."

The scientists say that injecting liquified CO2 into the undersea formations undergo natural chemical reactions that will eventually transform it into solid minerals similar to limestone, thereby alleviating concerns about the greenhouse gas leaking back to the surface.

To ensure that the liquid CO2 doesn't change back into gas it has to be placed at least 2,500 feet below the surface for natural pressure to keep it in a liquid state. While basalt formations on land are comparatively shallow, those underwater go far deeper, covered by water, and hundreds to thousands of feet of sediment.

The results of this research have been published in this week's Proceedings of the National Academy of Sciences.