We've had reason now and again to mention the unusual ape photographed at Yaounde Zoo (in Cameroon) a few times. I finally got round to digging out and scanning the only photo of the animal I've seen: it was taken by Peter Jenkins and Liza Gadsby and first appeared in the November 1996 issue of the Newsletter of the Internal Primate Protection League (IPPL). It was later published in issue 100 of Fortean Times. 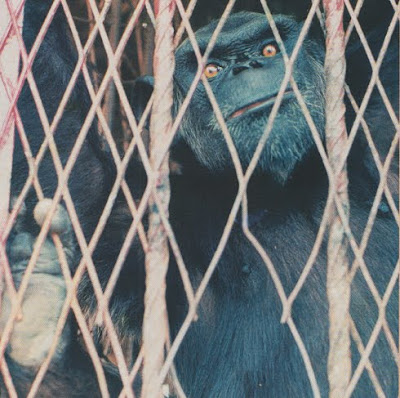 ench Congo, and to live alongside chimps of the nominate subspecies (Hill 1967, 1969) [type specimen of While Hill regarded the kooloo-kamba as a distinctive chimp subspecies, previous authors regarded it as a distinct species somehow 'intermediate' between chimps and gorillas, or as the product of gorilla-chimp hybridisation. Supposedly, several individuals were kept in captivity during the late 1800s and ealy 1900s, including 'Mafuca' of the Dresden Zoological Garden, and 'Johanna' of Barnum and Bailey's circus collection. There's a substantial literature on these animals. Some mammalogists said that they were gorillas, others than they were chimps, and others said that they were hybrids, or intermediates (see Shea (1984) and references therein). It has most recently been argued that 'Mafuca' was a Bonobo P. paniscus (see de Waal 1997), in which case at least some 'kooloo-kambas' were definitely not gorilla-chimp hybrids or intermediates at all.
It does now seem that the kooloo-kambas of the older literature reflect the fact that both gorillas and (especially) chimps are more variable in facial anatomy, body size and overall appearance than many primatologists were once willing to accept. Chimps of some populations, for example, are larger, darker-skinned, and superficially more 'gorilla-like' than many of the chimps first brought back to Europe, but this doesn't mean that such animals are hybrids, or intermediates. Indeed, Shea (1984) concluded that the 'kooloo-kambas' present in osteological collections are either large male chimps, or small female gorillas. Various other controversial African apes - most notably the Pygmy gorillaPseudogorilla mayéma (see Groves 1985) [shown here, photo ©, by B. Heuvelmans] - also tell us more about our poor understanding of variation, and don't necessarily point to the presence of additional distinct taxa. 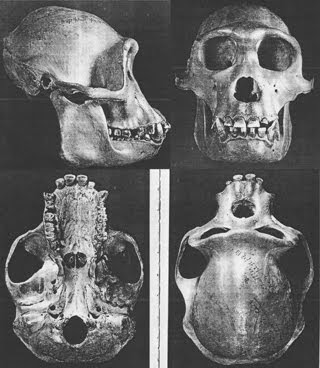 Having said all that, the possibility that some 'kooloo-kambas' or kooloo-kamba-like apes really were or are hybrids, or new taxa, does still exist. Could individuals like the Yaounde Zoo animal shown above really be hybrids? I don't know: opinions gratefully received. Incidentally, if you're wondering how the 'Bili apes' of DRC fit into all this, see the previous Tet Zoo comment here.
Posted by alisha marie [smiles] at 8:40 PM